We are HERE, too

International Organization for Migration defines migration as “the movement of a person or a group of persons, either across an international border, or within a state” regardless of its length, composition and causes1. According to the data provided by UNFPA, currently there are 244 million migrants in the world moving due to globalization, war, poverty, political oppression or similar reasons2. 65.6 million people are compelled to live outside their homes due to forced migration. Over 10 million refugees are under the age of 183.

Majority of people living in Syria had to leave their homeland due to security reasons as the war broke out in 2011. A significant number of Syrians initially sought asylum in the border cities of Turkey, as these cities were closest to their homeland. It is evident that women and children are the most vulnerable of such displacement. Not being able to adapt to new conditions due to cultural differences, not being able to speak the language, unorganized humanitarian aids, insufficient nutrition and sheltering and similar factors continue to make women and children suffer from harsh living conditions.

KAMER Foundation conducts various projects designed specifically for Syrian women and children believing that every person taking refuge in our country should have the same rights and opportunities. In addition to these particular projects, KAMER ensures the integration of Syrian women and children to the already existing programs. Initially, these activities were merely distributing the humanitarian aid provided for Syrian refugees. However, currently, they are carried out as organized programs with its particular methods as well as effective outcomes. Within the scope of these programs, in collaboration with UNFPA, KAMER provides health-care services, offers Turkish language courses, carries out household visits, conducts neighbourhood meetings, organizes awareness raising group workshops and playing together group workshops where refugee women and their children can participate together. To date, KAMER was able to reach thousands of refugee women.

The idea of writing such a book emerged from the question of how KAMER touched the lives of refugee women. Although sometimes quantitative data indicate the successful implementation of the program, listening to women’s first-person stories and witnessing their transformation tell us a lot about how deep the program affects the women. 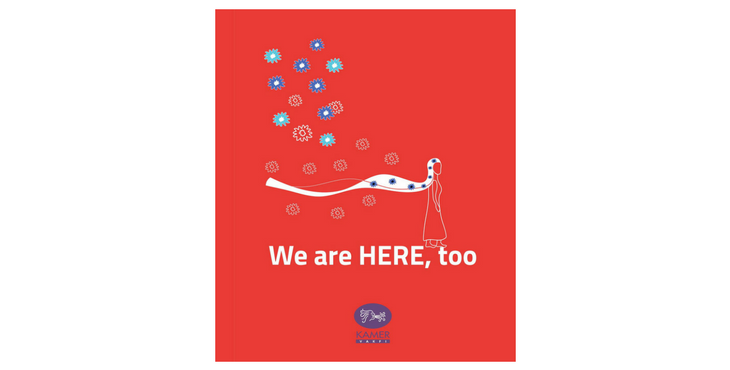 In pursuit of these stories, we made in-depth interviews with 19 women in KAMER centres located in various provinces of East and Southeast Anatolia in July 2017. While transcribing the interviews, we did not share women’s names and the provinces they were living in for the sake of anonymity. We gave a pseudonym for each story. We started the interviews with a question of how happy the women were these days. Majority of the answers we received were full of longing to their lives back in Syria.  We asked them to recount the story of their lives in Syria, their experiences of war and their lives in Turkey. 19 women we interviewed were somehow related to KAMER where some were working in the centres as translators or health-care assistants in the project carried out in collaboration with UNFPA; some participated in Turkish language courses, awareness raising meetings or neighbourhood meetings; some started to come to KAMER after household visits.

We conducted the interviews in Turkish with women who could speak the language; with those who couldn’t, we had translators who could speak Arabic or Kurdish or both.  Language posed a problem for us as much as it did for refugee women. Certainly, women could have expressed themselves better in their native language. Yet, we had the support of women working in KAMER centres who could speak that language and this was a clear indication of the importance of working locally for us.

Women were thinking of spending the rest of their lives in Turkey as the war still continued and they did not believe that their country would be restored anymore. And this new life was not exempt from the difficulties of being a refugee. The women we visited preferred to flee to the regions where their native language was also spoken widely. Although this eased their daily lives to some extent, not being able to speak Turkish occurred as an obstacle in receiving public services such as health and education. At this point, we realized the necessity of Turkish language courses KAMER offered for Syrian women. Being able to speak Turkish after attending these courses was empowering for women in their daily life and in accessing public services.

While holding these interviews, the discriminatory language and racist discourses used in the media and in various sections of the society as well as the discrimination women faced in their daily lives was one of the most challenging problems women confronted. Another problem was financial difficulties. Unemployment was a major problem. Among the women we interviewed, there were lawyers, teachers or university students who could speak multiple languages but had to drop out school due the war. Because their graduation certificates were not recognized in Turkey, they could not practise their profession. Those who could were usually underpaid. Additionally, the rental prices soared after coming of Syrian refugees was a matter of complaint. The houses in poor conditions were hired for exorbitant prices.

This work showed us the necessity of the programs KAMER carried out with the contribution of UNFPA in terms of providing the support refugee women needed in face of all these difficulties. We realized the importance of reaching refugee women through household visits where women go from door to door as well as providing basic health care services. We came to understand how the meetings held were able to influence women and how language course changed women’s lives. As women started to participate in KAMER’s activities, they began to transform themselves, their lives, their children, their husbands and their immediate environment. Seeing that these women not only learned about women’s rights, children’s rights and refugee rights but also were able to exercise these rights once more reminded us of how valuable this and similar projects are. We met women who called themselves “a feminist”, or who wanted to be the rector of a university or who wanted to become head of the state. We saw women sharing the power they got from KAMER with other women. The longer women contacted KAMER, the more awareness they had, and the more aware they become of their own powers and the freer they were. Women also shared with us their wish to start a women’s centre in Syria like KAMER if the war ended and if they could go back to their country. They told us that they were dreaming about carrying out awareness meetings with Syrian women. The gleam in their eyes was strong enough to overcome all the difficulties they would face despite the dark days they have been through.

KAMER Foundation has been actively working in order to reach women in 23 provinces of East and Southeast Anatolia for 20 years despite all the difficulties without compromising any of its principles. 10 years ago, in the book “I Exist” women once again narrated their stories of empowerment upon their contact with KAMER and claimed their existence. 10 years later, KAMER reaches its hand to women and children seeking refuge in these lands and claims existence together with Syrian women saying, “We exist, too”. This is a reminder of the importance of collective empowerment and this power continues to arouse hope in us and among all women in the dark days we are going through.

We are HERE, too click to read the book

Handicraft products of women from KAMER are in Purple Bazaar